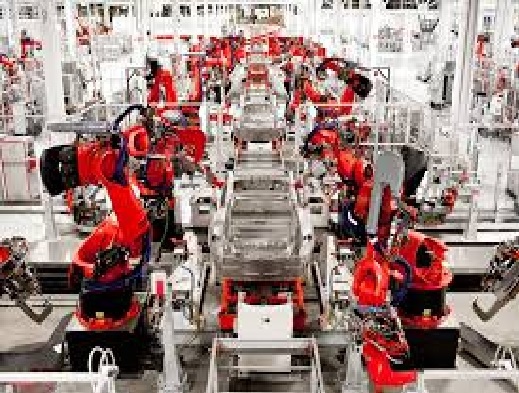 We talk a lot on this blog about the important global social and economic transition now underway.  It is very disruptive, and it has only just begun.  Over the coming years, many human jobs will become obsolete.  Policy makers need to be thinking about how we make this transition as a global society and have plans in place to soften the blow.  Otherwise, there will be significant human upheaval which can be accompanied by suffering and war.  Elon Musk is one of the most prominent, but not the only change-maker.  Jeff Bezos at Amazon and the Google team are also pushing the envelope on automation of manufacturing and services.

The result will be degradation of employment over time.  I appreciate the positive spin of comparing new manufacturing jobs since 2009 (850,000) with the increase in number of robots (125,000) and how that is a 6:1 ratio.  But there is no apparent cause and effect.  The two numbers are not correlated at all.  The new jobs since 2009 are the rebound off of the worst recession since the Great Depression of the 1930s.  The new robots are just that, new.  As robots do more and more tasks once done by humans, in both manufacturing and service industries, jobs will be lost and workers obsolete.  Yes, there will be new and better jobs installing and maintaining that technology for those with the experience and training.  But the ratio of work in automated business sectors might be more like 1:6 rather than 6:1.  Perhaps if generous accounting of all jobs related to robots and automation, sales, support, design, there might be a 1:3 ratio of new jobs to new robots going forward.  And each robot can replace 2 to 6 workers depending on its efficiency and work load.  Robots can work 24/7 with no vacations and can can do repetitious jobs much more dependably.

Matthew Debord at “Business Insider” recently wrote a very insightful piece on Elon Musk and his ambitions at Tesla.  Here are the key takeaways:

But what Musk truly has in mind is something completely inhuman.

Or more accurately, something posthuman. His goal is to radically remake not simply auto manufacturing but all manufacturing by using a much higher degree of automation. To that end, Tesla bought a German firm, Grohmann Engineering, that specializes in automated processes.

The overarching goal is to get past the limits of human speed. A fully automated factory could, in Musk’s thinking, be operated by a few human experts, but otherwise, raw materials would go in one end and finished cars would roll out the other. In between, robots would do everything, a very high speed — speeds too dangerous to risk around frail human bodies.

Now you might ask, “What about the people?” Doesn’t Tesla want to keep employing California auto workers?

Actually, no. At some level, although Musk admires and appreciates the dedication of his workforce, he doesn’t think auto assembly is the best use of human life.

Then there is Jeff Bezos’ plans for the grocery industry.  Not only is Amazon now making same day home deliveries of online purchases in some cities, it has much more ambitious automated plans to make grocery workers obsolete.  Even before Bezos acquired Whole Foods in June, he was demonstrating nearly total automation of grocery stories.  This article from the New York Post explains how:

That’s what Amazon CEO Jeff Bezos appears to be thinking, as his Seattle-based web giant has contemplated a two-story, automated grocery store in which a staff of robots on the floor upstairs grabs and bags items for shoppers below.

The ground level of the futuristic prototype — a supermarket-sized version of its recently unveiled “Amazon Go” convenience store, with a bigger layout that could span anywhere between 10,000 and 40,000 square feet — would be devoted to goods that shoppers typically like to touch, sources briefed on the plans told The Post.

Those could include as many as 4,000 items, spanning fresh fruits and vegetables, eggs, meats and cheeses, and grab-it-and-go stuff like beer and wine, the sources said. Pharmacies might also might spring up at some of the high-tech locations, as Amazon looks to break into the lucrative sector, insiders said.

But for many, the most striking feature of the bigger stores is that they could operate with as few as three employees at a time. Sources said the plans call for staff to max out at 10 workers per location during any given shift.

“Amazon will utilize technology to minimize labor,” a source close to the situation told The Post.

Futura Automation is committed to an automated future.  It is inevitable.  I do not argue against it like some late-day Luddite.  George Jetson will have his day.  But HOW we get there is still a matter of wide open debate.   We can stumble our way to this future with all the social disruption and potential for cataclysmic war that goes with it.  Or we can plan our way to this future and make sure people are respected and supported all along the way.  Which will it be?