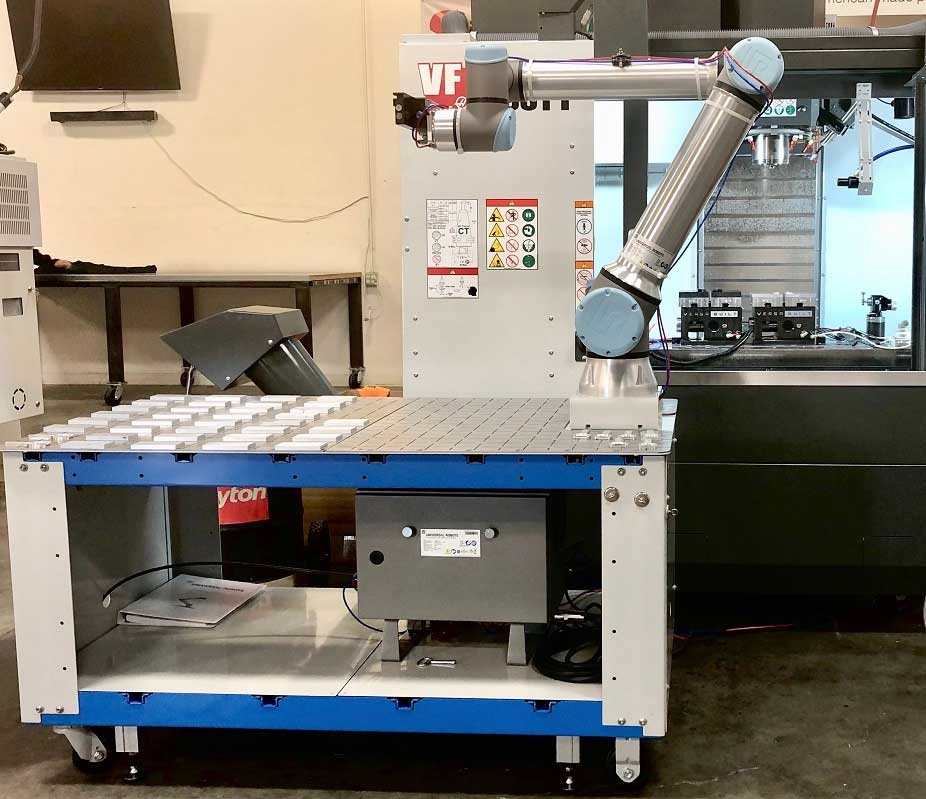 VersaBuilt Robotics was born out of the CNC production facility of Rekluse Motor Sports. Rekluse is a leading manufacturer of aftermarket motorcycle clutches. Being successful in the aftermarket motorcycle clutch business requires making many different part numbers in small quantities, with large swings in volume due to seasonal demand. Recognizing that CNC operator labor was a constraint for the business, Rekluse management made the decision to pursue robotic CNC automation.

Working with a local robotics integrator, and starting with traditional robot grippers and CNC vises, the team was soon struggling. Trying to integrate the dozens of diverse part shapes that were candidates for robotic automation was proving to be more difficult, time-consuming, and expensive than anticipated.

One day, after a frustrating round of failures, one of the engineers asked, “Why can’t the robot and CNC vise use the same jaws?” After a round of glances with raised eyebrows, the discussion quickly moved to a whiteboard brainstorming session. The team recognized that if they could make a jaw system that was shared by both the robot and the CNC, they could truly generalize the integration of almost any part shape for automation.

After several months of R&D, the first version of MultiGrip jaws were put into production. With MultiGrip jaws, the team was soon integrating new parts for automation in hours instead of weeks. Patents for the new technology were filed.

The management team at Rekluse recognized that MultiGrip technology had applications far beyond the needs of Rekluse. In 2014, VersaBuilt, Inc. was formed as a new company to build automation products around the new MultiGrip jaw technology.

MultiGrip provides faster change-over than other types of automation workholding, saving valuable labor and making it easy to justify adding lower volume parts to the automation system. And only MultiGrip has a simple, effective solution to the difficult problem of Op 1 to Op 2 transfer in CNC milling automation.

When you buy into VersaBuilt’s MultiGrip system, you are gaining the support and experience of a team of with more than 50 years of combined experience automating high-mix CNC production and committed to your success. 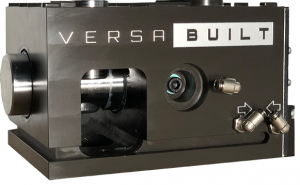 The MultiGrip Vise may also be tended using traditional robot grippers.
Whether you’re looking for improved part quality and operator efficiency in a hand-tended CNC milling application or are ready to deploy a fully automated CNC machine tending system like the VersaBuilt Mill Application Kit, the MultiGrip Vise delivers.

Robot2CNC is a small industrial computer that sits inside your CNC’s control cabinet and provides a Ethernet control interface for any robot that has ethernet TCP/IP support. The Robot2CNC interface is simple and remains the same for all supported CNCs. For Fanuc CRX10 cobots, programming is greatly simplified with the Futura Automation pre-designed solution. that works on a standard handheld PC or pad PC. Other brands of robots can use Robot2CNC by making a TCP/IP connection to the robot and issuing simple text-based commands. By allowing the robot to select the CNC program number within the automation, both robot and CNC programming are simplified and the chance for expensive operator errors during change over are reduced.

Futura Automation offers the FANUC CRX10 cobot with the VersaBuilt 1300.  Futura Automation believes the CRX10 is a superior cobot solution to the UR10 model and has a fully trained team to service and support the CRX10. 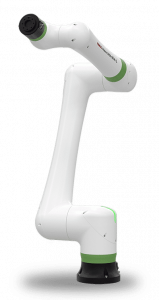 VersaBuilt Robot systems are easy to assemble, or a shop can contract Futura Automation to assemble and calibrate the system for them.

The VersaCart 1300 is sized to provide a generous infeed area yet is compact enough to fit in even the most crowded CNC spaces. The VersaCart 1300 is CNC laser cut and formed from powder-coated steel for precision, durability, and long life. The Visual Infeed System allows for fast easy part alignment by the operator for pickup by the robot. The lower shelf provides storage for the robot controller and may also be used to store MultiGrip Jaws. The VersaCart 1300 is mounted on a heavy-duty caster for portability and includes leveling feet to secure the VersaCart into position in front of the CNC. 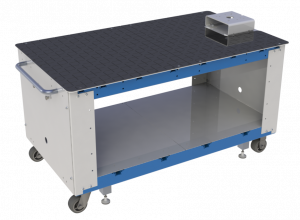 The VersaCart Visual Infeed System is a laster cut galvanized steel plate that bolts to the top of the VersaCart. A 2″ by 2″ alignment grid makes it easy for an operator to quickly and accurately align material to be processed by the robot. The grid pattern works well for both rectangular and rounds shapes. For non-uniform shapes, the Visual Infeed System can be removed in just a few minutes and replaces with custom laser cut part locators.