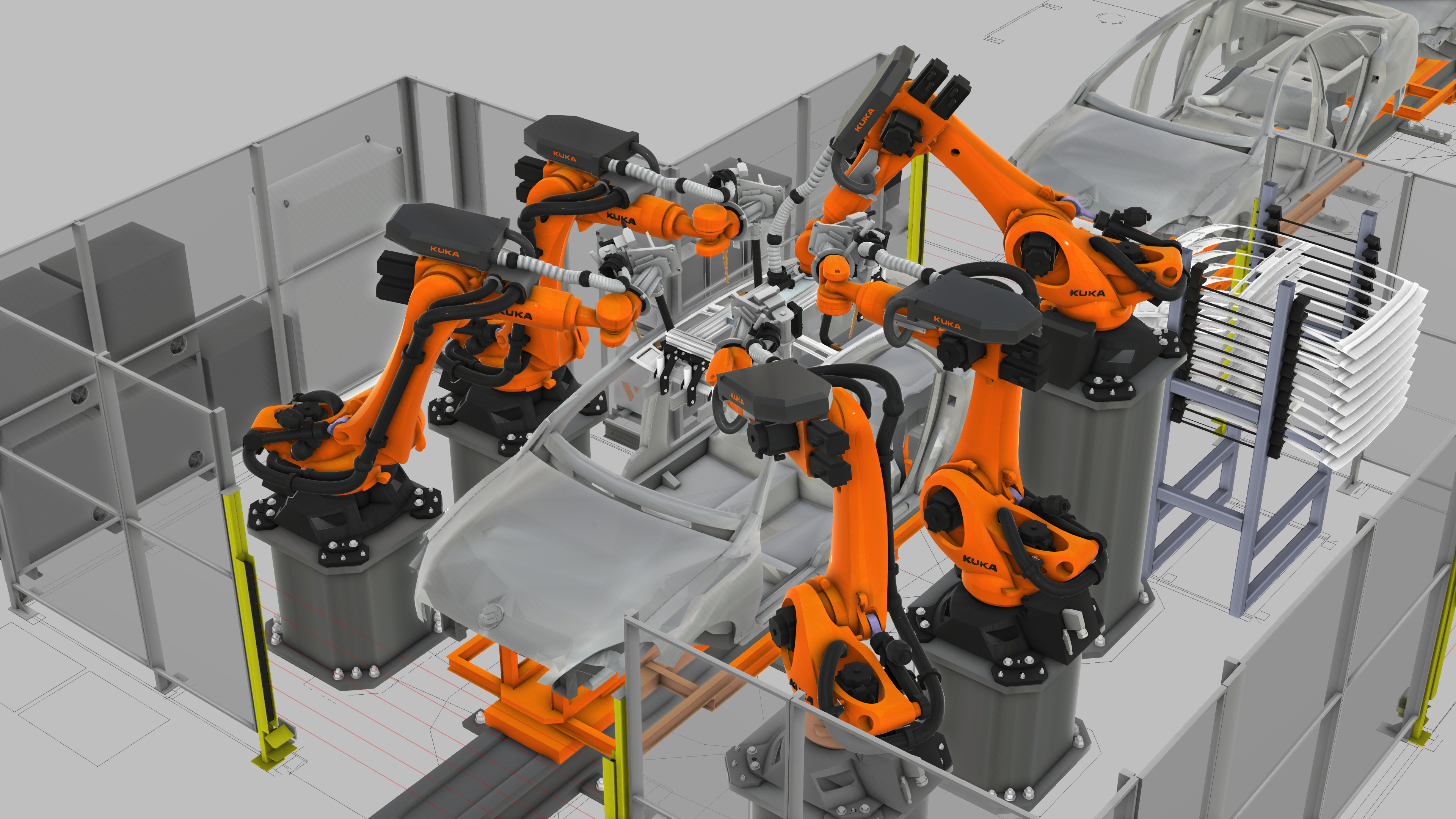 Following is an updated and edited reprint of an article in the June 21, 2016 issue of Robotics Business Review:

ODENSE, Denmark — Industrial automation promises greater efficiency, but re-engineering the processes of a particular factory or warehouse can be a big challenge. Visual Components 4.2 Essentials, the successor to 3DAutomate from Visual Components Oy, offers to make that much easier.

The software includes, ECatalog, a library of more than 50 brands of industrial robots that can be dragged and dropped into various simulations, 1434 models and counting.  ABB, Fanuc, Mitsubishi and Kuka alone represents over 100 models each in the lineup.  There are many other categories of components including AGVs and AGCs, ASRS, Controllers, Conveyors, Feeders, Linear Actuators, Machine Tending, Machine Tools,  Pallet Jacks and Lift Trucks and many more.  It is a feature-rich pre-designed component environment with the ability to import new components and machines and incorporate kinematics, if desired.

Visual Components Essentials can be used to demonstrate to internal managers and customers the value of adding robots (and automation) to a production line, said Mikko Salminen, sales manager for EMEA at Espoo, Finland-based Visual Components.

“You can build up a machine-tending cell, drag and drop CNC systems for machine tending, and snap on conveyors,” he said at RoboBusiness Europe 2016.

With Visual Components Essentials, it’s possible to design a large-scale production line, test and measure the throughput, and record and replay the video at any speed. A user could add or move robots and components as desired and see how they interact with existing processes, including those conducted by human workers.

“In one to four hours, you can build a production line [simulation], connect process stages, and visualize the process flow,” Salminen told Robotics Business Review. “You can set inputs and outputs, go to the pedestal [robot], and snap on different grippers.”

For instance, if a user has a production line in which objects such as food packages are moved from one conveyor belt to containers on another, VC Essentials could show how different robots would do the same task.

Essentials includes an online equipment library of 2,365 components for “plug’n’play” simulation. The software was updated with feedback from existing users.

The software includes physics to show how objects would behave in, for example, a bin-picking application. It shows how items such as cables would move because of gravity.  And users can scan in existing facilities for even more realistic simulations.  Futura Automation will assist customers who do not want to develop the expertise to create a simulated manufacturing environment.

Not only does the latest version of Visual Components’ flagship product allow for a 3D representation of an existing or modified line, but it also generates useful data, thanks to a simulation engine running in the background.

“The software can export to a 3D PDF, which requires only Reader to view the animations,” Salminen explained. “We can export the training to robots, and we include translation of trainings across robots.”

“It includes more graphics, as well as a bill of materials in the PDF,” he said. “We can also export AutoCAD templates.”

“It’s possible to move all objects in one environment, and the files aren’t huge,” Salminen added. “I can run it all just on a laptop. It doesn’t require a huge CADWorx station.

“It is an all-in-one tool for Industry 4.0 and the smart factory,” Salminen said.

Visual Components’ touts its Essentials software as being easy to use and able to expand, from visualizing and communicating a theoretical production line to simulating and analyzing it. OEMs can use it for re-selling equipment with customized software.

Visual Components 4.2 Essentials includes 1,434 robot models so far, and integrators could use the software to compare how different robots would perform a given task.  It provides a great tool to prove a concept and a convincing ROI.

The software includes some automated guided vehicles (AGVs), and Visual Components has added the MiR100 from Mobile Industrial Robots ApS, along with Otto, Kuka and Omron Adept.

Essentials also allows for testing of reach, controllers, and collision avoidance. It has open interfaces, and updates are pushed out to all users.

“It also has offline programming of applications such as spot welding,” Salminen said. “There is real-time rendering, and we can parameterize models.”

Visual Components was founded in 1999.  It has offices in Lake Orion, Mich. The company has licensed its software to KUKA.

“In addition, we can model laboratories and clinical environments with the same tool,” Salminen said in reference to healthcare facilities using 3DAutomate. Universities and research institutions can also use the simulation software.

FFG Feeler, a CNC machine builder in Taiwan, has the largest vertical machining center builder in the world. It wanted to build a factory in a predetermined space and was able to accurately model its production line using Visual Components’ product.  Futura Automation invites all customers evaluating new production lines or entire manufacturing facilities to discuss a proposal to simulate the production systems in advance of purchasing and installing systems.  Futura Automation will work with all equipment providers and design engineering companies to create a realistic simulation of the production workflow.

Coming soon to Visual Components is a virtual reality (VR) application so that simulations can be experienced in real time and 3D.  We will keep our customers informed when this new capability is launched and provide demonstrations on demand.