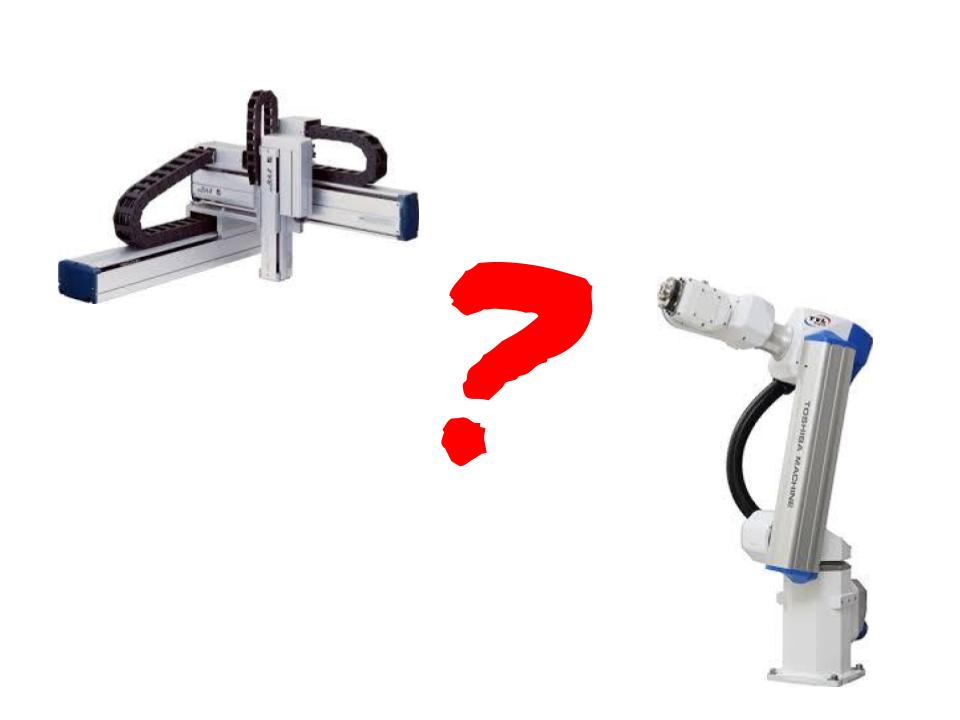 Which robot is appropriate for loading and unloading machines is especially pertinent with injection molding and die-casting machines with their high cycle rates.  Scott Kendrick, Engineering Manager of Sepro America, published an article in “Plastics Today” magazine on April 23, 2014 that is still definitive today.  We reprint it here:

The 3-axis Cartesian beam robot (sometimes called a gantry robot) is the workhorse of injection molding automation. Unlike 6-axis articulated-arm robots and simpler devices like SCARA robots, which can be used in almost any industrial application, Cartesian robots are configured mainly to meet the unique needs of injection molding.

Cartesian robots get their name from the French philosopher and mathematician René Descartes, who used three basic X-Y-Z axes to define three-dimensional space. These robots all have a vertical Z axis that allows them to reach into the space between mold halves; an X axis that is defined by the horizontal beam that normally reaches from an area above the mold to a point outside the machine; and a Y axis that moves the vertical arm in-line with the machine to strip parts off mold cores or position them outside the molding area.

If you need a robot simply to remove a part from the molding machine so as to allow rapid, repeatable cycling, a 3-axis robot is probably all you need. It is only when you need to ask more of the robot—additional manipulation inside the mold or outside the machine—that you need to start thinking about advanced 3-, 5-, or 6-axis robots.

At the other end of the spectrum, 6-axis articulated robots have an arm that is similar in many ways to the human arm. It can rotate around its base like the human limb rotates at the shoulder. It can bend in the middle like a human elbow, and it has a wrist that can rotate and also move the hand in an up-and-down arc. Thus, an articulated-arm robot can grip an object at almost any angle and at almost any point within its reach.

Some of the same motions have been built into the 3-axis robot wrist using pneumatic actuation. These are what Sepro calls the R1 and R2 rotations and they move the wrist from 0° to 90° or 0° to 180° without any intermediate stops. Depending on how much additional automation is built into a molding cell—insert feeders or gauging, deflashing, welding, or decorating devices, for instance—the addition of pneumatic wrist rotations to simple 3-axis robots can allow them to be part of automated systems that are quite complex.

Not discussed here are linear side-entry robots, which are more limited in scope—lacking a vertical Z axis and specialized solely for high-speed part removal with little or no further manipulation of the parts.

Today, a 5-axis all-servo Cartesian robot can offer many of the same parts-handling capabilities as a 6-axis articulated-arm robot, but does so in a configuration that will be familiar to anyone who has used 3-axis robots. The X, Y and Z axes are identical. It is the servo wrist at the end of the vertical arm that makes the difference. The R1 and R2 motions are available, but instead of having to move through the full 0° to 90° or 0° to 180° swings, the servo wrist can move through any portion of those arcs at any time, and the movements can all be executed simultaneously. In fact, the robot can move in all 5 axes at any time with complete control.

The secret is in the electric servo drives. Under pneumatic power, a valve opens to allow air pressure to move the wrist, which will continue to move until it reaches a hard stop that shuts the valve and cuts power. A servo motor, on the other hand, has a positional encoder that recognizes exactly where the drive shaft is at any moment. The system control is then able to integrate positional signals from all of the servo motors on all 5 axes so that it knows exactly where the gripper and part are in space at all times. This allows the robot to complete very complicated motions very precisely and with perfect repeatability.

If you have a complex part that can’t be ejected from the core in a straight line, or if you have limited space between mold halves or tiebars, it may be necessary to rotate a part before it can be lifted out of the machine. The servo wrist is able to make those multi-axis movements in the same way that the human hand and wrist would do it, but with much greater speed and precision.

Once the part is out the mold, it may be necessary to perform secondary operations like glue application, assembly, or edge flaming to remove flash. Without releasing the part, the 5-axis robot can move it with precision past a stationary flame source or glue head. This is far more efficient than having a human operator perform these functions or placing the part in a fixture so that some other piece of automation can execute the secondary operations.

Today’s servo-driven 5-axis Cartesian robots have the advantage of top-entry speed for shorter cycle times as well as the flexibility inside and outside the mold of an articulated-arm robot. Thus, 5-axis robots can perform many of the complex part-manipulation tasks historically assigned to 6-axis articulated arm units.

That is no longer a necessary obstacle. Some suppliers—Sepro among them—have recently introduced articulated-arm units adapted to use control systems like those of more familiar Cartesian robots. Sepro’s 6X line, for example, uses simple pick-and-place programming, whereby the user needs only to identify step-by-step the different points and positions in the robot cycle—picking, quality inspection, unloading, stacking, etc. Then the operator manually “teaches” the robot the path between each point and the trajectory, either straight-line or curvilinear, is computed automatically.

Thus, injection molders today will find 6-axis robots much easier to program and operate than in the past. They can now evaluate Cartesian and articulated-arm configurations solely on the basis of which suits their application best.

The big difference between 5-axis and 6-axis robots is the latter’s 360° reach. Cartesian robots are restricted to movement in line with, or perpendicular to, the molding machine. A longer beam can add side reach or, when they are installed in an axial configuration (with the long X-axis beam extending along the top of the machine), Cartesian robots can unload parts at the end of the molding machine, potentially allowing molding machines to be positioned closer together or otherwise optimizing the use of floor space.

Cartesian robots are normally mounted on top of the injection machine’s fixed platen. Consequently, they cannot reach forward to the injection end of the machine. A 6-axis robot, on the other hand, has a larger working envelope since it has equal reach in all directions.

Because they are not usually mounted on top of the molding machine like beam robots (though they can be), they may be the only automation solution for plants with limited overhead space. Since 6-axis robots normally enter the mold area from the side rather than the top—like Cartesian beam robots—articulated-arm units may be better for vertical-clamp insert molding. Their movement is not limited by the vertical clamp and they can easily reach multiple stations on the rotary tables often found on those machines.

Advantages, however, can become limitations in different circumstances. Floor mounting is good when ceiling heights are low, but problematic when space around the machine is limited. Side entry usually limits 6-axis robots to the back of the machine, where they will not interfere with access to the operator control panel. With a top-mounted Cartesian robot, there is easier access to either side of the machine.

The speed of articulated-arm robots has increased in recent years to a point where they are comparable to Cartesian models in many motions, but beam robots are generally regarded as being faster at moving into and out of the mold space to retrieve parts. This could be critical in some fast-cycle molding applications.

Lastly, there is the issue of cost. As a general rule, a Cartesian robot—even with the addition of the servo wrist—is going to be about 30% less costly than an articulated-arm unit.

None of these factors should be taken to mean that one configuration is better or worse than the other. It really depends on the unique conditions in each molding plant and on specific applications. Cartesian and articulated-arm robots are sometimes even used together. The machine-mounted beam robot picks the part and presents it to the articulated-arm unit for secondary operations. This may be the ideal setup when molding cycles are relatively short and downstream functions are especially numerous, complicated, or time-consuming.

Molders today have more choice than ever when it comes to automating their process. More choice, however, also adds complexity to the decision-making process when it comes to identifying the features and capabilities are required. So, just as you would enlist the help of a knowledgeable and reputable dealer to assist in the purchase of a car, it is important to seek the informed counsel of a reliable supplier for help in selecting which robot is right for your plant and application.

Scott Kendrick has been with Sepro America since its formation in 2007. He is now product project manager. For the 12 years previous, he worked as project engineer and, later, engineering manager with the Conair Group, which at the time distributed Sepro Robots in the U.S. and Canada. Contact: (412) 459-0450; email: skendrick@seproamerica.com; web: seproamerica.com.