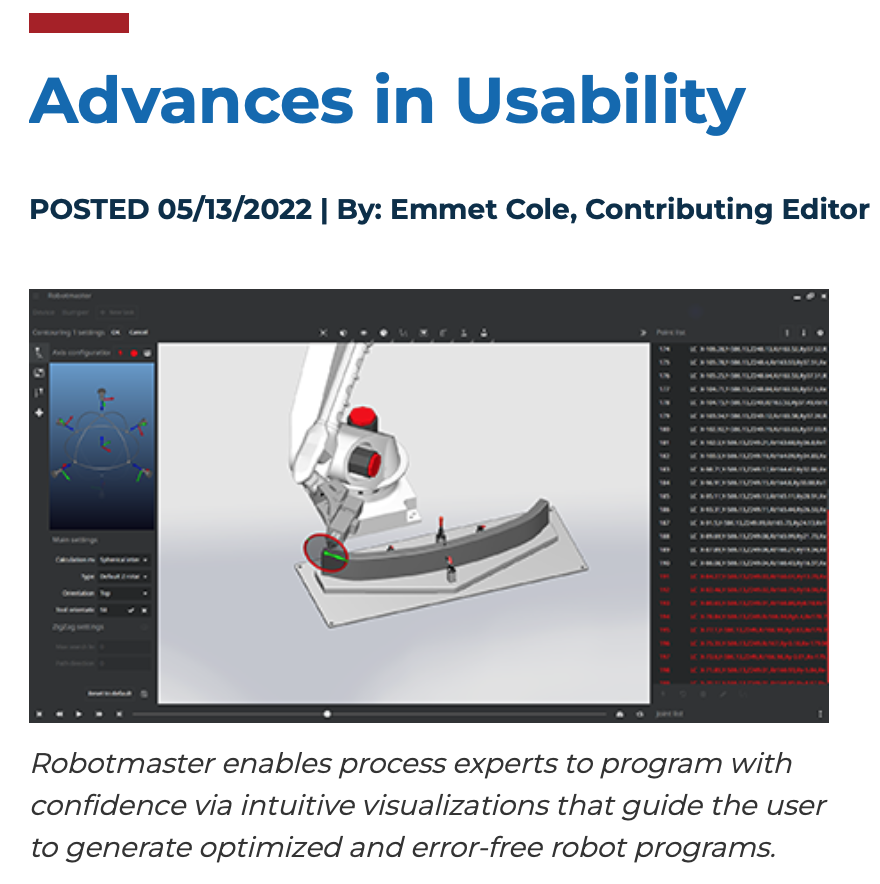 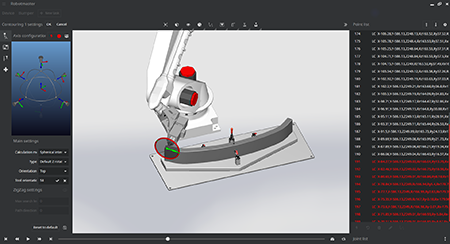 Robotmaster enables process experts to program with confidence via intuitive visualizations that guide the user to generate optimized and error-free robot programs.

One of the most powerful trends in industrial robotics over the past decade has been the growing popularity of new programming methods and interfaces designed to make robots easy to program –even for non-experts.

Collaborative robots have been at the forefront of this trend, inspired by the goal of making industrial automation accessible to companies of all sizes and skill levels. But usability is vital across the entire spectrum of industrial automation and is an issue for both expert and non-expert robot operators alike.

Today, industrial robots can be programmed in numerous ways that score high on usability and don’t require a Ph.D. or coding experience to handle. Hand-guiding (in which you literally guide your robot arm by hand to program it instead of painstakingly inputting every coordinate on a clunky teach pendant) and offline programming software are prime examples of the type of advances that have made industrial automation easier to use than ever before.

The days of robot programming being performed through an old-fashioned teaching pendant are, in most cases, gone. This era’s new industrial robots can be programmed by a smartphone app, modern teach pendant, or tablet, and through intuitive and extremely user-friendly interfaces.

Reducing complexity
Usability is the most important factor when it comes to customer perceptions of automation, says Ben Gibbs, CEO at READY Robotics –a Columbus, Ohio-based company that has developed Forge/OS, a universal operating system for industrial automation.

“This is true not only of automation but technology in general. If you had to write 100 lines of code to send an email, would you ever send an email? Instead, you click a couple of buttons and a whole bunch of ‘magic’ happens beneath the hood. That’s where we need to be with robotics.” 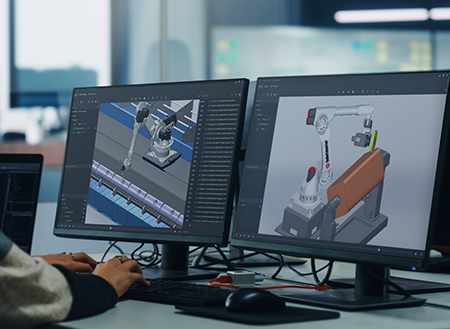 Robotmaster offline programming software combines functionality and ease of use, enabling end-users of all skill levels to program the leading industrial robot brands from a single solution.

“End-users don’t need to know any of these robot-specific languages,” Gibbs explains. “They just need to know how to create flowcharts to be able to program both cobots and industrial robots from leading brands like Fanuc, ABB, Yaskawa, Epsom, Kawasaki, and Universal Robots, the exact same way.”

While SMEs have benefitted greatly from the emergence of user-friendly programming tools and interfaces, companies of all sizes are struggling to find labor at all skill levels and price points, which drives interest in easy-to-deploy automation among large companies too.

“Whether you are a large enterprise or a small machine shop, you can benefit from robots. And you shouldn’t have to be a Ph.D. roboticist or a seasoned robot programmer to be able to use them,” says Gibbs.

Pioneering simplicity
Hanover, New Hampshire-based Hypertherm Inc. is a pioneer in the development of offline programming tools designed to take the pain out of industrial robot programming.

Hypertherm’s Robotmaster software, which was first launched twenty years ago, has always been designed with ease of use in mind, says Natalie Adams, Head of Product Marketing – Robotics at Hypertherm.

Robotmaster enables end-users –including those with little or no previous programming experience– to program many of the leading industrial robot brands with ease. The process begins when an end-user imports a CAD/CAM model of the part they want to work on into the Robotmaster software. The end-user simply selects the edges they wish to perform a process on –such as cutting, polishing, trimming, or deburring. Next, a robot program is generated that tells the robot exactly what to do.

“Once the program is created based on the CAD model and end-user inputs, a second interface within the software allows the user to take that CAD model and bring it into a robotic system. This allows flexibility. You can switch robot cells without having to recreate the program. And you can switch robot brands without having to reprogram the part.”

Robotmaster eliminates the need for complex CAD/CAM software solutions. And it relegates the teach pendant to a device that’s used only for turning the robot on and off. 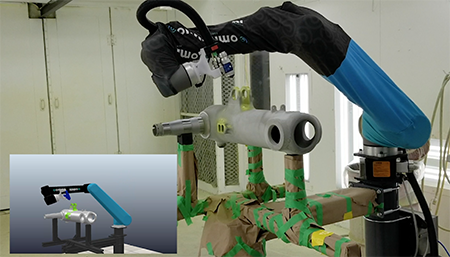 Omnirobotic’s R&D effort has traditionally been focused on spraying applications (shown above with digital twin inset), but the company is now working on expanding the application set to include welding, sanding, machining, deburring and other tasks.

Next level usability
Techniques like hand-guiding and user-friendly universal programming interfaces are great for lowering the barriers to automation adoption, but providing robots with the intelligence to perform a wide range of tasks autonomously brings usability to the next level by virtually eliminating manual programming altogether, says Rob Ravensbergen, Marketing Director at Omnirobotic, a Laval, Canada-based company that has developed a suite of technologies designed to provide robots with autonomous programming capabilities.

“Enabling industrial robots to function autonomously is the next step in usability,” says Ravensbergen. “The biggest benefit of autonomous functionality is not just the savings in programming and deployment times, but that robots can respond effectively to high mix production. Users only need to load predefined process instructions and the robot can process highly varied batches of parts.”

Omnirobotic’s 3D perception tools, when combined with the company’s task planning and motion planning Shape-to-Motion software, enable people to easily set up autonomous robot applications. For end-users, this means that there is minimal positioning and fixturing required. It also means that no manual programming is required to set up an application.

”Our technology enables humans to work in collaboration with industrial robots rather than having to drag them ‘bare knuckle’ through every step of every process that needs to get done,” explains Ravensbergen. “Being able to just push a button and have the robot execute an entire process with limited preparation and no real fixturing or jigging is a huge enabler for integrators, manufacturing engineers, and production people.”

The primary users of Shape-to-Motion are manufacturers in aerospace, heavy equipment, and metal fabrication, but integrators are also drawn by the technology’s ability to eliminate a huge amount of repetitive programming work.

View all posts by Futura